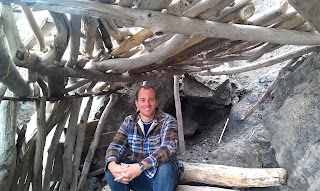 Look how at home he looks!
But the story we heard from the old man also had us thinking of our earliest memories of our fathers.  D thinks his earliest memories involve climbing the hill behind their house in Arizona together.  What I believe to be my earliest (and what I know to be a true memory because there aren’t any home videos) is a combination of racing and football.  We used to live in what I considered to be a magnificent house in the country, just outside of Versailles.  I think it was my favorite house I ever lived in.  I also think it might not be nearly as cool, and probably a lot smaller if I went back there now, since the last time I set foot in the place I was 8 years old.  But for me, you couldn’t beat the big garden we had with corn stalks and pumpkins, and the back deck, and the huge yard with the big sandbox and swing set (which by the time we moved out I could proudly climb on top of, just like my big brother, M.)
Here’s a view of the backyard. 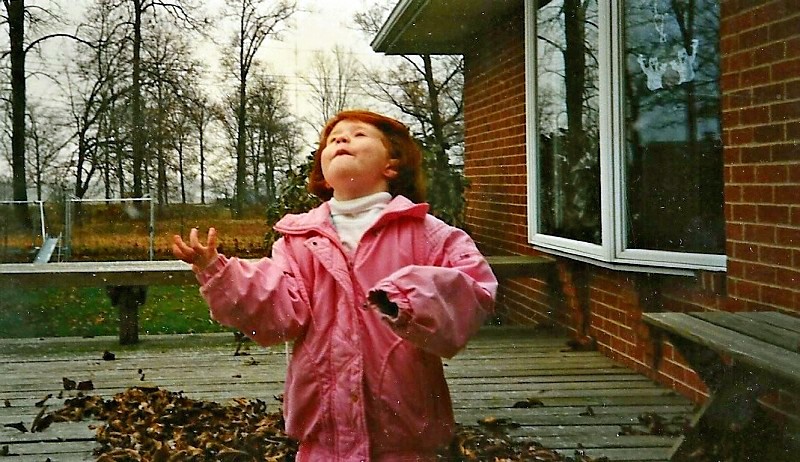 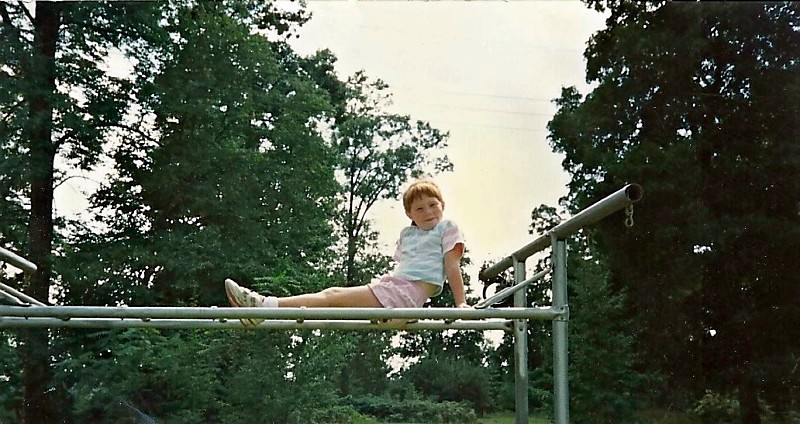 And there’s me on top of the monkey bars.  A proud feat.
Anyways, I remember Dad used to set the football in the middle of the backyard, and that would be where Dad, M, and I would start our race.  Then he would let me go first, then M, and then he would go.  The first one to make it around the house and snatch up the football first, won!  Then the other two would tackle the winner, I’m pretty sure.  The reason I believe this to be of my earliest memories of my father is because I can remember being so small that my chubby little legs could barely carry me, and they just wouldn’t go as fast as I wanted them to go!  I think I may have won the race around the house a couple of times, but now that I’m older, I’m pretty sure there was some serious cheating done by the other two in order to let me win. 🙂

I’m curious- what is your earliest memory of your father?

According to my Myers-Briggs personality profile, I am a guardian of birthdays, holidays, celebrations, and traditions; not a keeper, a guardian.  I definitely identify with this description.  My family has always made a huge deal about holidays and birthdays when I was growing up, so I always assumed my almost ridiculous observance of birthdays was just normal.  Now I know, it’s not only the way I was raised, but it’s also part of who I am.

On September 11, 1988, my favorite person in the whole wide world was born; my fiance.  I have had the pleasure of celebrating his 5 past birthdays with him, including this year, though we have only been dating 3 and a half years.  His 20th was an epic party at a certain house we call, “The Schwul,” his 21st was spent in Akron, epically not drinking, his 22nd was a party at a condo in Fort Collins, CO, and for his twenty-third I bought him all kinds of backpacking gear, and surprised him by renting a car to drive us to Yosemite National Park for our first Yosemite backpacking trip.  We began hiking up the Upper Yosemite Falls trail around 7pm, and did most of our hiking in the dark.  We set up camp almost completely in the dark, with the exception of Derek’s headlamp, and woke up to find ourselves in the middle of this:

Since backpacking is pretty much Derek’s all-time favorite thing to do, I had to come at this year’s birthday surprise from a new angle.  I tried to think of all the things he likes to do: Trying new things, learning how to do something, working up a sweat while doing it, having some adventure, and seeing great sites.  With this, I came up with stand-up -paddleboarding (SUP).  It was something he had never done before, and we had not yet actually gotten in the ocean out here, so I figured it would be perfect; something new for us to explore together.
So on the Saturday morning of Derek’s birthday weekend, I loaded the whole CA family up into my Focus, and we headed down to Santa Cruz (closest place for us to go to the ocean).  When I asked Derek where he thought we might be going, based on the direction we were headed, his first guess was Santa Cruz.  Oh well, when we pulled into the SUP rental place, he thought we were in that plaza for the  frozen yogurt. 🙂
We then proceeded to take 2 trips down to the ocean to get all of our boards there:


The guy encouraged us that we would not need wetsuits because the boards were so big, there was no reason we’d be going in the water.  We believed him.  Well, Tomko, our experienced surfer-dude wore his own wetsuit.  He knew better.
For those of you unfamiliar with SUP-ing, as I was, it is basically like a big, fat surfboard you can stand on and balance well.  They also give you a paddle so you can propel yourself in still water.  IT. WAS. AWESOME.  I was definitely the first person to fall.  Big surprise (not at all a surprise).

The ocean was freezing, and the salt kind of burned.  So, after enough falls on my part, I decided it would be much more fun for me to just continue in a less compromising position.  Other people must have felt the same.

After that got uncomfortable, we decided to just paddle while sitting on our butts.  Then, Derek got tired of  paddling, so since he was the birthday boy, I let him latch on to me while I paddled for both of us. 🙂
.

Once we got out of the harbor, THE MOST INCREDIBLE THING happened!!!  We saw dolphins!!!  Real, wild, dolphins swimming out in the ocean right next to us!  They were playing with wild sea lions too!!! I was SO unbelievably enthralled with them!  I couldn’t stop screaming about them!  They probably hated me, haha!  I am still not over the amazement of this experience.

A couple of hours into paddling, we all hooked our boards together with our feet, and stopped for some lunch. Sean was wearing a backpack, in which he had packed some beef jerky; and yes, he had fallen into the ocean with that backpack on. 🙂

After we finished SUP-ing, as suggested by Tomko, we went to play one of Derek’s favorite games, disc golf (frisbee golf), on one of the best courses in the U.S.

The plan after frisbee golf was to build a fire on the beach with an above-ground fire ring I bought Derek for his birthday.  Unfortunately, by the time we got back to the beach, it was already after dark.  We climbed around with our headlamps in the dark for a little bit, but we were promptly kicked off the beach by the night guard.  We went home, stopped at the store for some camp food, and made a campfire at home instead. 🙂  There were many more surprises (24 total, including homemade carrot cake AND cream cheese frosting with no sugar or artificial sweeteners), but I won’t bore you with all the details.  I figured hey, when would I have the chance to give my fiance 1 surprise every hour, for every year of his birth, for 1 day again?   All in all, Derek said everyone really “hit it out of the park” for his whole 24th birthday experience.  Success. 🙂